Spectral Analysis of a Coalescent Model of Human Evolution.

Principal component analysis (PCA) is one of the most frequently-used approach to describe population structure from multilocus genotype data. Regarding geographic range expansions of modern humans, interpretations of PCA have, however, been questioned, as there is uncertainty about the wave-like patterns that have been observed in principal components. It has indeed been argued that wave-like patterns are mathematical artifacts that arise generally when PCA is applied to data in which genetic differentiation increases with geographic distance. In this talk, we study a coalescent model – the umbrella model – for the diffusion of genetic variants. The model is based on a hierarchy of splits from an ancestral population without any particular geographical structure. In the umbrella model, splits occur almost continuously in time, giving birth to small daughter populations at a regular pace.

Our results provide detailed mathematical descriptions of eigenvalues and eigenvectors for the PCA of sampled genomic sequences under the umbrella model. Removing variants uniquely represented in the sample, the PCA eigenvectors are defined as cosine functions of increasing periodicity, reproducing wave-like patterns observed in equilibrium isolation-by-distance models. Including rare variants in the analysis, the eigenvectors corresponding to the largest eigenvalues exhibit complex wave shapes. The accuracy of our predictions is further investigated with coalescent simulations. Our analysis supports the hypothesis that highly structured wave-like patterns could arise from genetic drift only, and may not always be artificial outcomes of spatially structured data. Genomic data related to the peopling of the Americas are reanalyzed in the light of our new theory.

For any question, please write to: paul.bastide@umontpellier.fr 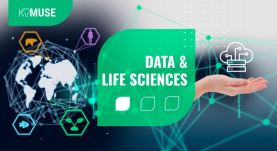 Olivier François is a professor of applied mathematics at Ensimag Grenoble INP – Université Grenoble-Alpes, and a member of the biomedical engineering department TIMC. His research interests are in population genetics, environmental genomics and molecular ecology.