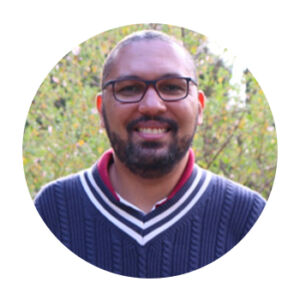 Ederson Jesus holds a Ph.D. in Soil Sciences from the Federal University of Lavras, Brazil. Currently, he is a scientific investigator at the Brazilian Agricultural Research Corporation, also known as Embrapa. His research focuses on soil microbial ecology and plant-microbe interactions, especially the interaction between rhizobia and legumes. He is working with biological nitrogen fixation on common beans, which is the focus of his research at MAK’IT. He has also been developing research on the effects of land use on soil microbial communities in the Brazilian Amazon.

Dr. Jesus leads projects funded by Brazilian and international funding agencies such as the Brazilian National Council for Scientific and Technological Development and the National Academies of Sciences, Engineering, and Medicine of the United States. He has been collaborating with researchers in Brazil and abroad as well.

A tale of symbiosis: Unveiling the interaction between the common bean and its rhizobial symbionts

The common bean (Phaseolus vulgaris L.) is one of the most important legumes for direct human consumption. This crop gets into a special symbiosis with soil bacteria known as rhizobia, which live in root nodules and where they provide the plant with nitrogen from the air. This process is known as biological nitrogen fixation (BNF). The common bean nodulates efficiently with Rhizobium tropici, but not with Bradyrhizobium species. However, I found out that a synergism happens when these two bacteria are mixed, benefiting the plant.

Despite the positive results, the mechanisms underlying this interaction have not been unveiled. I hypothesize that two symbiotic components, nodulation genes and the Type III Secretion System (T3SS) may be involved. Their role will be assessed by generating insertion and deletion mutants and testing how these mutations affect the synergistic co-inoculation effect. The genomes of different Bradyrhizobium strains will also be compared to look in detail into other genetic features that may be related to the symbiosis phenotype. Additionally, the colonization of the nodules by wild-type and mutant strains will be evaluated by microscopy.

I ultimately expect this work to raise relevant information to the development of green, low-cost technologies for tropical agriculture.